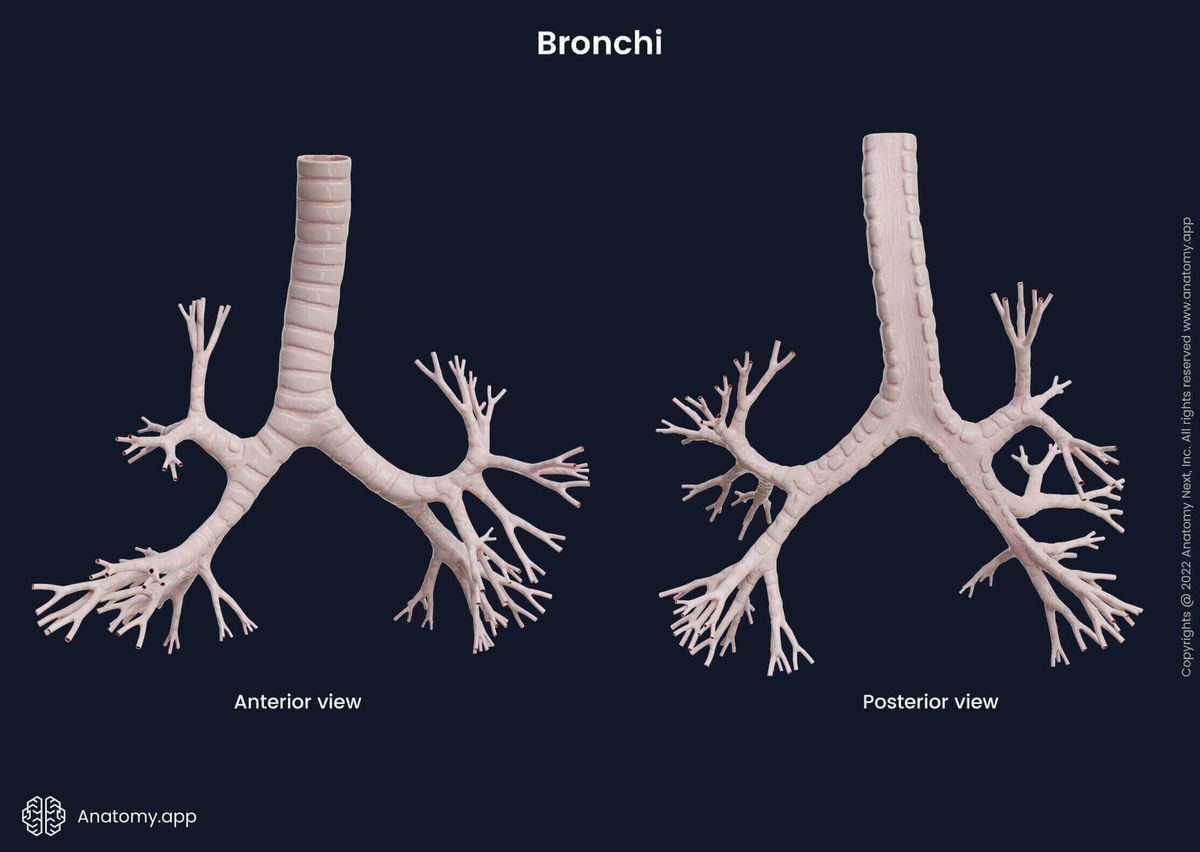 Bronchi (plural in Latin: bronchi, singular: bronchus) are flexible air tubes located inside the thoracic cage. The bronchi generally are conducting airways that contain cartilages. They belong to the lower airways and are part of the tracheobronchial tree that connects the trachea to the lungs.

The lower airways divide into branches that become progressively smaller in diameter and multiply in number, resembling a tree with branches. Therefore, they are collectively referred to as the tracheobronchial tree. Overall, there are around 16 generations of bronchi and bronchioles in the human respiratory tract. The tracheobronchial tree is divided more or less symmetrically in both lungs.

At the level of the carina, the trachea divides into two main (principal) bronchi - right and left. The tracheal carina is a ridge at the tracheal bifurcation that usually projects at the sixth thoracic vertebral body (T6) level (ranging from T4/ 5 to T7). Each main bronchus enters the lung through the hilum of the lung. The main bronchi are then divided into smaller branches - secondary and tertiary bronchi. First, the bronchi are divided into the lobar bronchi (secondary bronchi) corresponding to lobes of the lungs. The right lung has three lobes and three lobar bronchi. The left lung contains two lobes, and therefore, it has two lobar bronchi.

The segmental bronchi further divide into several generations of subsegmental bronchi. They become increasingly narrow, progressively loose their cartilage and divide further into bronchioles. The bronchioles are conducting airways of smaller diameters (usually ∼1 mm) and, in contrast to bronchi, their wall does not contain cartilage or submucosal glands. They are also surrounded by the connective tissue of the lungs. The bronchioles are short. They end with a part that is called the terminal bronchiole.

The tracheobronchial branching system up until the terminal bronchioles is considered non-respiratory and is known as the conducting zone. Its main function is the conduction of inhailed air, meaning, its components primarly serve as passageways for air to travel to and from the lungs. The terminal bronchioles further continue as the respiratory bronchioles. They form the transitional zone (between the conducting zone and the respiratory zone), as they can participate in gas exchange to some extent. The respiratory zone consists of the alveolar ducts and alveolar sacs containing the alveoli. The primary function of this zone is gas exchange.

Right main bronchus and its subdivisions

Left main bronchus and its subdivisions

The inferior branch of the left superior lobar bronchus is headed downward towards the anterior lower part of the left superior lobe (lingula) and gives off the common lingular bronchus. The common lingular bronchus then soon divides into superior and inferior lingular segmental bronchi. This kind of distribution is different from that of the right lung. The corresponding branches in the right middle lobe head to the medial and lateral bronchopulmonary segments.

Like the trachea, the bronchi are lined by a mucosal layer, consisting of respiratory epithelium and supporting lamina propria - a connective tissue layer beneath the epithelium. Under the mucosa lies the submucosal layer. It is made of connective tissue and contains smooth muscle cells, bronchial glands, blood vessels, lymphatics and nerves. The third layer is either the muscular or cartilage layer or both. Large bronchi contain cartilages that are absent starting from the bronchioles. Therefore, bronchi until bronchioles usually have cartilage and muscular layers, while bronchioles present with a muscular layer. And finally, the fourth external layer is adventitia, made of fibrovascular connective tissue.

The epithelium of the bronchi is similar to that of the rest of the airways. The bronchi are mainly lined by the respiratory epithelium (pseudostratified columnar ciliated epithelium), containing mucus-secreting goblet cells. Bronchioles are lined by simple columnar to the cuboidal epithelium. The loose connective tissue of the mucosa is composed of many elastic fibers. Six types of cells are found in the non-respiratory conducting part of the airways: ciliated columnar, goblet, Clara, brush, basal and neuroendocrine cells.

Lymphocytes and mast cells are also found in the airway epithelium. They migrate to the epithelium from the underlying connective tissue.

The submucosal layer is located under the epithelium and lamina propria. It contains seromucous glands situated mainly in the larger bronchi and in the smaller bronchi to a lesser degree. The seromucous glands are made up of serous and mucous cells, and they produce mucus that covers the surface of the ciliated epithelium. Bronchioles do not contain bronchial glands.

The connective tissue of the submucosal layer contains long bands of elastin that form a web. This network of elastic fibers helps to adjust the diameter of the airway to the flow of air. These fibers assist the lungs in returning to the initial state during expiration. The submucosal layer also contains smooth muscle cells.

Bronchi can be classified according to the structure of their walls, and they can be either cartilaginous or muscular bronchi. Larger bronchi contain a significant amount of hyaline cartilages in their walls. As they branch further and divide into smaller bronchi, the amount of cartilage decreases while the number of smooth muscle cells increases.

The cartilage layer is made of fibrous tissue and individual cartilage plates. The muscular layer is formed by longitudinal and circular bundles of smooth muscle cells. Smooth muscle fibers are controlled by the nervous and hormonal systems. The contraction of smooth muscle cells within bronchi makes the airways narrower during expiration (bronchoconstriction). In contrast, relaxation makes the airways wider during inspiration (bronchodilation).

The lymphatic drainage originates from the bronchioles and their surrounding plexuses. Lymph node groups are located along with the divisions of the bronchial tree. The peripheral lymph is drained into the hilar nodes and further into the tracheobronchial lymph node groups along the sides of the trachea. The vessels from these nodes merge together with the vessels from the brachiocephalic and parasternal nodes, forming right and left bronchomediastinal trunks.

Innervation of the bronchi happens via anterior and posterior pulmonary plexuses. They are located around the hila of the lungs in front of and behind the tracheal bifurcation and main bronchi, anastomosing with each other. The plexuses are formed mainly by branches of the vagus nerve (CN X) and sympathetic trunks. The efferent fibers from the vagus nerve are parasympathetic and participate in the narrowing (constriction) of the airways. The efferent fibers of the sympathetic trunks participate in the widening (dilation) of the airways.

It is usually self-limiting, although recovery is very slow (10- 20 days). It does not require any medical treatment, and, typically, antibiotics are not necessary. When the cough is present at least three months and happens multiple times over two years, it is referred to as chronic bronchitis. Chronic bronchitis is most commonly seen in smokers. (Read more about the cough reflex and the effects of smoking on the airways in our article on the trachea!)

Bronchial asthma (or simply asthma) is a chronic inflammatory condition that affects the airways of the lungs and causes occasional breathing difficulties. It involves airway inflammation, obstruction and bronchial hyperresponsiveness. The typical signs of asthma are coughing, shortness of breath, tightness in the chest and wheezing. Asthma is treated mainly by inhalers. The inhalers contain such medications as bronchodilators that dilate (widen) the bronchi and corticosteroids used to decrease bronchial inflammation.

Asthma is among the most common chronic diseases worldwide, especially among children. It is a significant public health problem. Due to restricted activities, asthma holds a negative impact on the quality of life of the individual and society. It also largely burdens the healthcare system because of the many emergency department visits and hospitalizations of asthmatic patients.